In Ottessa Moshfegh’s novel, My Year of Rest and Relaxation, the heroine tries to force sleep on herself by taking a cocktail of pills. Spoiler alert : this updated Sleeping Beauty experiment doesn’t go as planned, and she’s worse off than before. Still, the idea of pure rest and uninterrupted slumber, was so seductive, especially at the beginning of quarantine – which for me, was nearly three weeks ago – when I fantasised about sleeping through this time of isolation, and waking up when the bars and beaches were an option again.

Of course, work was always going to get in the way, as well as my body,  which does not have the biological capacity to feed itself or manage its own waste without me being a conscious player. In that first week of quarantine, though, my sleep did change, as my body was responding to increased levels of melatonin from the lack of daylight. It became heavier and more continuous  at night, and featured vivid, sometimes frightening dreams of the sea I was missing. One dream saw two giant mating stingrays leap out of the ocean and attack me, while another saw a killer-whale/shark hybrid zooming around La Concha bay like a speedboat, while I watched from the window of GU, the swanky nightclub that looks like a ship. Later, I noticed that the sea creatures took on the navy and white colours of police uniform, and were perhaps an animalisation of the authorities who barked at me when I was walking too close to the sea, on the way back from the grocery store. Dreams of ocean attacks aside, waking up later in the mornings, going to bed earlier, and collapsing onto the sofa for an afternoon nap, was blissful.

Alas, it was not to last – my body’s since become used to the lack of daylight, and now I’m back to having a lot of kinetic energy (it feels like having a spring up my arse) throughout the day, a second wind that gets me out my evening slump, and light broken sleep in the night. My boyfriend’s doing better at rest and relaxation.  When I met him, he said that if he were an animal, he’d be a bird, because he’s curious and would like to fly.  I was impressed with this answer, especially as previous boyfriends had said they’d be bears – a conventionally masculine choice.  Anyway, as it turns out, the current boyfriend has an inner hibernating bear. Quarantine often has him passing half of the day horizontal, either asleep or listening to music and podcasts, until work, the news cycle, or a really good olive oil causes his bird self to fly back.

Though quarantine continues, and some report that they’re losing track of the days, there are enough spectacles to keep us out of bed and on our toes – especially given that Pedro Sánchez likes to spring his life-changing announcements on Saturdays! FOMO, is another culprit in keeping us awake – checking on people and trying to keep their spirits up, is a full time job outside of the usual full time job. So no, those of who are blessed enough to be healthy, can’t sleep through it.  Though when unconsciousness comes to give us some relief from our frazzled minds,  it’s welcomed.

This is yet another chapter of my confinement diary. I learned how to turn my phone into a Wi-Fi hotspot, so this is a combined phone and laptop production.

It’s an ancient cliché that with each passing year, we grow more and more like our mothers. A carefree individual is swallowed into a resemblance of the woman who raised her.  But what truth does this myth hold today,  when women often have radically different experiences from their mothers and self-awareness is at its peak?

Women go through all manner of intricate measures to avoid becoming their mothers: there’s the therapist specialising in pattern recognition; the exercise regime keeping hereditary bulk at bay and let’s not forget the constant self-reprimand to listen, where she would have butted in, or speak up, when she would have stayed silent. We have a lot to lose if we surrender – our youth and identity for one. And yet we love our mothers, hold much of what they did as a gold standard and are anxious when we fall short.

I was touched to learn that a woman who had a hostile relationship with her tough-loving, erratic mother and dreaded becoming her, found peace in recognising that she inherited her fierceness. Fierceness, an uncommercial trait that the endless tea-parties and pink blooms surrounding mother’s day don’t account for – though anyone who has given birth, watched a wildlife documentary or dealt with a suburban woman trying to get her child through the 11+, knows it’s integral to maternity.

Growing up, I saw my mother as her own person. She worked full-time, while other mothers stayed at home, so I felt part of her life, rather than the centre. Sensitive and loving, she is unapologetically herself. I see myself becoming more like her in at least four ways, though I haven’t yet made the final leap…

With the exception of mildly bigoted elders from another era, who must be half-listened to and gently corrected, my mother doesn’t give fools the time of day, let alone allow them to influence her decisions. Controversially, whenever I was upset because someone scolded me for my opinion or cheek, mum would say they weren’t as clever as me. It didn’t matter whether this was my nanny, an older relative, or a Cambridge-educated mathematician. For a young girl, this was as radical as Marx’s comment on religion – it made me think that intelligence had the potential to dethrone authorities.  Taken literally, her stance could make me arrogant or intolerant of different perspectives. It’s vital to listen, but also to have boundaries and know how to protest the most dangerous kinds of foolishness. 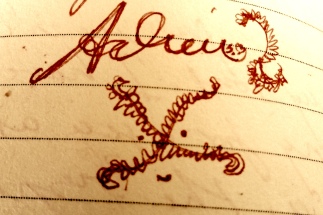 My mother has never shied away from asking for what she wants and is relentless until she has pursued every option for getting it. I have to admit, this quality embarrassed me when I was younger – I was the sort of person who would rather go hungry than face the awkwardness of asking for a vegetarian option. But now, whenever I have a craving, however fanciful, I will go to lengths to satisfy it.  There is a bench seat in a cafe with a view of a goldfish pond. After work on Tuesday, I knew that I had to go there and write. So, I walk for an hour, uphill, in high heels and when I reach my destination, find  two others have taken the space.  I sit at a neighbouring table and can’t help noticing they are so deep into their digital spheres, the view may as well not be there. Which pisses me off. The guy is wearing headphones, so I figure the girl is a safer bet. Before I can stop myself, I’m asking if we can swap seats, because I came here to draw that view (a teeny white lie). She  refuses, saying she too likes the view and is communing with the fish telepathically as she’s magnetised to her feed. Shrugging, I slink back to my seat. A minute later, the guy in headphones come over and asks, ‘sorry, did you want to sit by the view?’ Et volià.

3. Nurturing a collection of tiny containers

Like every old-fashioned housewife, my mother adheres to the proverb: ‘waste not, want not.’ Like a figure-conscious yummy mummy, she also doesn’t let a morsel of food she’s not hungry for, pass her lips. Hence the tiny containers. She drinks red-wine from a finger bowl she stole from the Eurostar; stores four remaining spaghetti strands in an egg cup and a dwindling stock of Christmas truffles are transferred to ever smaller dishes. She also collects shells and glass bottles with bases so minute, they have to lie on their bellies.

4. Never missing an opportunity to practice my latest skill

When mum begins a new hobby, it inflects everything she does. Now that she’s learning French, and determined to maintain her standing as étoile de la classe, she not only texts in French, but pronounces all ethnically ambiguous words and trade names in a French accent. E.g.: I-bu-pro-fén (Ibuprofen) and Có-có (Combined Codeine). She only half jokes that should she wind up on the wrong side of Article 50, she will move to France.*

My mother is always immaculate. I have never seen her coats or woollen jumpers pill or attract stray bits of fluff. I think she’s a witch…

*This is unlikely, as my mother has the immunity of formerly colonised peoples and decades of residency in this country. Only the likes of Theresa May are safer from deportation. But it’s her dream that counts.